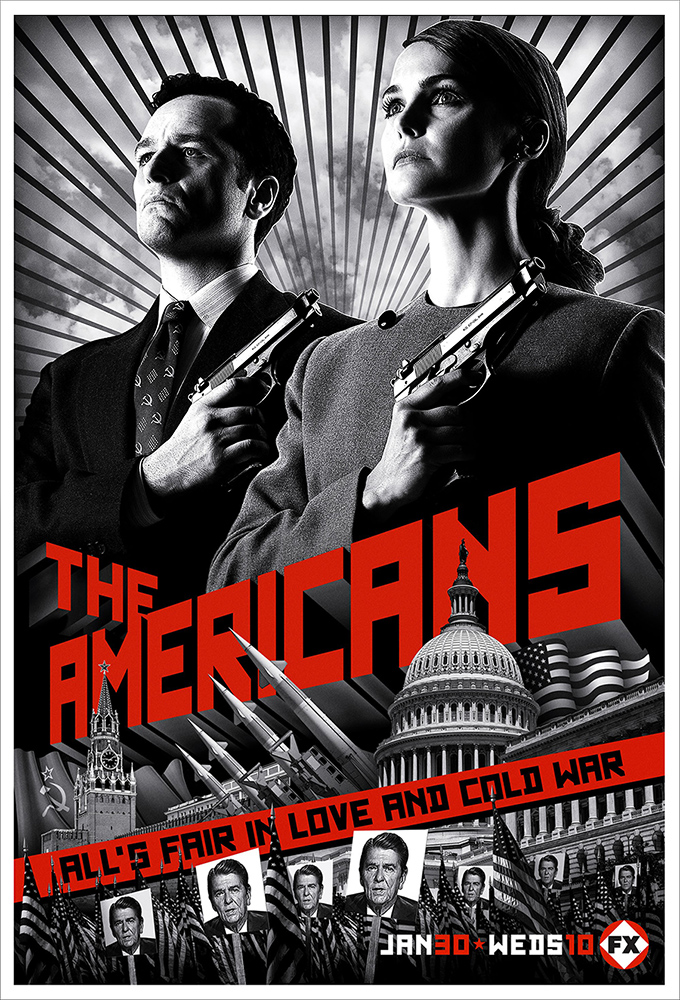 Philip and Elizabeth Jennings are two KGB spies in an arranged marriage who are posing as Americans in suburban Washington, D.C., shortly after Ronald Reagan is elected president. The couple have two children, Paige and Henry, who are unaware of their parents’ true identities until they tell Paige after some time has passed. The complex marriage becomes more passionate and genuine each day but is continually tested as the Cold War escalates. As Philip begins to warm up to America’s values and way of life, his relationship with Elizabeth becomes more complicated. Further complicating things is the arrival of the Jennings’ neighbor, FBI agent Stan Beeman, who is part of a new division of the agency tasked with fighting foreign agents on U.S. soil. The drama series was created by former CIA agent-turned-author Joe Weisberg.
First episode date: January 30, 2013
Network: FX
Production location: New York City
Awards: TCA Award for Outstanding Achievement in Drama, more

It is very rare that you have a near perfect episode, especially of a series on commercial television. But FX has done it here with The Americans. It is nearly flawless. Great mind candy for the thinking person, with something to come back to after the first viewing. I credit the success of The Americans to 3 things: Great script, great music, and Matthew Rhys.

The script is adult, no-nonsense storytelling built on an original premise, the Cold War. Those of us who are old enough remember this period, a period of the Russians-are-coming hysteria that was second only to the Civil Rights movement the decade before. An era very under- represented in film and ignored on the small screen, comes to life for a new generation.

Of course this era would be nothing without the music of this time and again, The Americans is flawless. “Harden my Heart” opens the series, and how appropriate. Disguised, and ready to perform sexual acts for information, we first meet the series heroine, Elizabeth Jennings whose heart is truly hardened. Fast forward to a back alley chase and we are introduced to our hero(?) Phillip to the pulsations of “Tusk” by Fleetwood Mac. “Tusk” is appropriate here too. Just think about it.

Phillip, played by Matthew Rhys, is special, or should I say, Matthew Rhys is special as Phillip. Rhys takes the art of disguise to the next stage. He is authentic, nerdy and funny in disguise talking to Martha, reminding you of a young John Ritter. And then as the kick-your-ass, baddest-ass-kicking daddy of them all over a barbecue pit, Rhys is wonderfully dangerous, stellar, and I can’t get enough of him.

This series only has to live up to its pilot a little bit. The series has everything: originality, sex, espionage, suspense…did I say originality? And yes, Matthew Rhys who has the role of his life, I daresay, the role he has been waiting for, is the welcomed surprise here. Hat’s off to casting. Can’t wait to see what they are going to do with this.

Keri Russell On “The Americans”

Keri Russell in The Americans

Keri Russell in The Americans [S5E6]

Keri Russell in The Americans [S5E5]