Dame Helen Mirren Proud Of Being a Sex Symbol At 71

She vows to remain a sex symbol until she dies

Guess what? She takes selfies too … 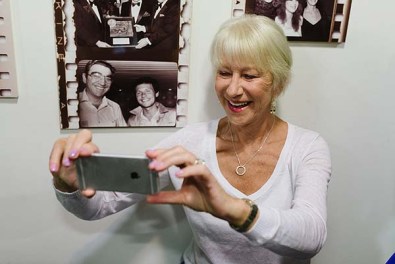 The 71-year-old actress – who regularly finds herself on the best dressed list at showbiz events – believes people will always talk about her appearance and is convinced her sultry look will follow her to her grave.

“I think it’s probably going to follow me to my grave,” theCollateral Beauty star told AARP The Magazine for their latest cover story.

Helen – who stars alongside female icons Kate Winslet, Julianne Moore and Uma Thurman in the 2017 Pirelli calendar – said: “I think it’s probably going to follow me to my grave.”

Mirren’s enviable physique has been celebrated for decades. The Oscar winner showed off her fit frame in form-fitting ensembles in films such as 1981’s Excalibur. As fans will recall, she donned a number of skin-baring ensembles in the movie as sexy Morgana. And in 2003’s Calendar Girls, she went completely nude.

Helen married her long-time partner Taylor Hackford in 1997 and has admitted the thought of having children has never really crossed her mind.

She said: “It’s very hard to unpick your choices. But a lot of it was choice, absolutely. So yes, I did very consciously choose my work over my relationships right up to the time that I met Taylor. I was 38 when I met [him], pretty late in life. We got married in the end because we realized that we were going to be together forever. We got married, ultimately, for legal reasons more than anything else…I always said I have nothing against marriage, it just wasn’t to my taste, like turnips.”

Dame Helen Lydia Mirren DBE is an English actor. Mirren began her acting career with the Royal Shakespeare Company in 1967, and is one of the few performers who have achieved the Triple Crown of Acting … Wikipedia