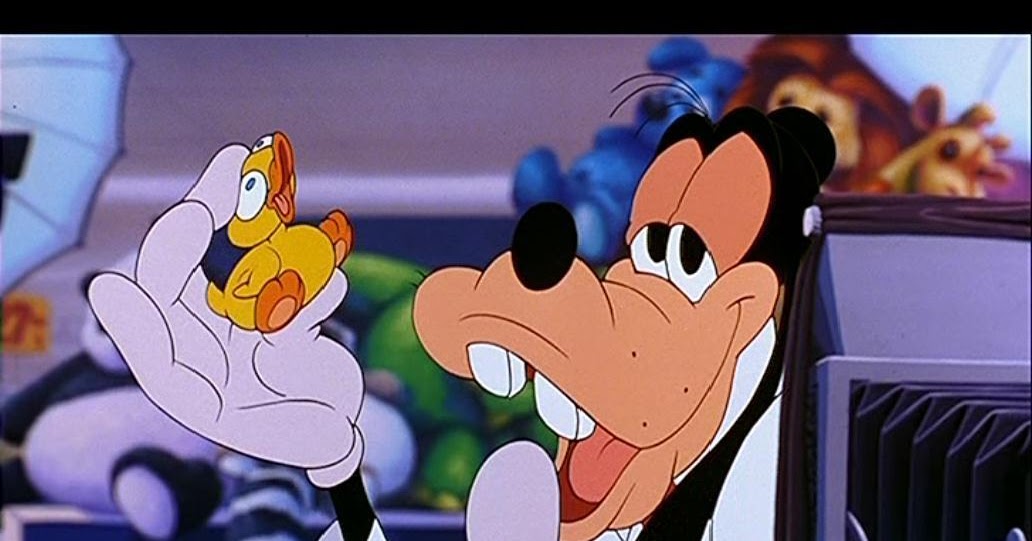 I used the Goofy timeline to determine Goofy’s history and age by the end of the 2nd movie. (Theory)

So, while watching the 2nd Goofy movie, it struck me as very odd that Goofy never completed college. With how much he cares about Max’s education and education as a whole, you would think he would have gotten a degree.

After watching both movies several times and paying very close attention to some of the hints mentioned, I believe I know the answer to why he never finished college.

This theory ended up allowing me to work through an entire theoretical timeline of Goofy’s life up until the end of the 2nd Goofy Movie. Here is my conclusion for all to hopefully enjoy…

Goofy mentions that he loved living during the 70s which means he has to be a preteen-through-teenager during that era.

Now, Goofy also has only 3 years of college experience. Using this as a guideline to him being a single father currently here is what I am concluding:

Goofy was born in 1961. He started college in 1979 and drop out in 1982 after Max is born. While his girlfriend takes care of Max he ends up getting random jobs to pay for his new family (As seen in the Goofy Shorts). Some time between 1982-1989 (In the Goofy shorts, Max is never really shown to be older than 7 years old). Goofy’s wife/girlfriend passes away.

It is during this time period in which GOOF TROOP starts when Max is going through the ages of 11-14. At the start of the Goofy Movie, Max is near the end of High school and after High School it leads into Extremely Goofy Movie.

Thoughts on my theory?

I can’t wait for the inevitable Goofy movie where he is an old dog on his deathbed, and Max has to spend the movie making things right before his father dies. Maybe there’ll be a montage of his life somewhere in there.

Jay_Eye_MBOTH_WHY: Goofy and Pluto originally were similar, actually Pluto walked and talked and was much smarter than Goofy. Well Goofy didn’t like that. *Not. One. Bit.* One night after Pluto had successfully entertained everyone on Disney’s Stars on Ice Show, Goofy set in motion an event that would change Disney and the two characters forever.

As Pluto exited the ice arena to a standing ovation at his brilliant, headlining performance, he never knew the horror that was lying in wait. Pluto made his way past the security guards and went un-escorted, as usual, down the empty hallways that formed the labyrinth maze that was the Staples Center in beautiful Los Angeles.

But L.A. is a town that can make or break you. For Pluto, L.A. had seen his ascent to the top of the Disney empire, riding third sidekick to Mickey and displacing Goofy. His L.A. was a much starker contrast, years being the dumb one, years not being as good as Pluto, years of being the creep. L.A. the beautiful was shattered that night, as Pluto made his way down towards his dressing room.

As he turned the corner he suddenly ran into Goofy. His eyes hovering with the same expressionless lust they always had. He was like a zombie, maybe he had brain problems, it was always as if he was looking through you. A single gorsh uttered from Goofy. Pluto was caught off guard by the creepy, lesser than. And in that instant, Goofy raised his fist clenched crowbar. He brought it down like a carpenter hammering a nail into a board of wood. Immediately the bar connected with Pluto’s ankle, shattering it completely.

Pluto let out a yelp, an unanswered cry for help. But his cries were deafened by the cheering crowd from inside the arena. They were so loud cheering at Mickey now, no one could hear the horror that was taking place, backstage. With another swift raise, that fist clenched crowbar momentarily blocked out the light from the fluorescent overhead bulbs. At that instant Pluto made eye contact with Goofy. At that instant they connected. At that instant his fears were becoming realized. His plea for a reprieve, his visible pain and agony met only with the unremorseful glare of eternal damnation. He knew Goofy had gone too far and that he couldn’t just explain any of this away, and he now knew Goofy knew this too. The true horror had now set upon Pluto as a cold beads of sweat formed on his skin because it was at that instant he knew he was going to die.

Goofy’s arm came down swinging like a major league batter but with the relentlessness of a hydraulic press, striking the crowbar into Pluto’s skull. The impact was so forceful blood spurted from the wound covering most of the hallway, the crowbar, and Goofy’s pristine white gloves. And yet Goofy did not blink. That same creepy stare he’d held his entire life eeriely lingering as he raised the crowbar up. He knew what he had done. But for him, he reckoned the third time’s the charm as he brought the crowbar one more time onto Pluto’s head. The dog suddenly seizing up as the final blow was dealt, his leg shaking uncontrollably as the blood soaked into his fur. The crowbar dropped with distinctive clanging sound as it hit the ground. Goofy was gone.

But he did not count on one thing. You see, Pluto *did not die.* 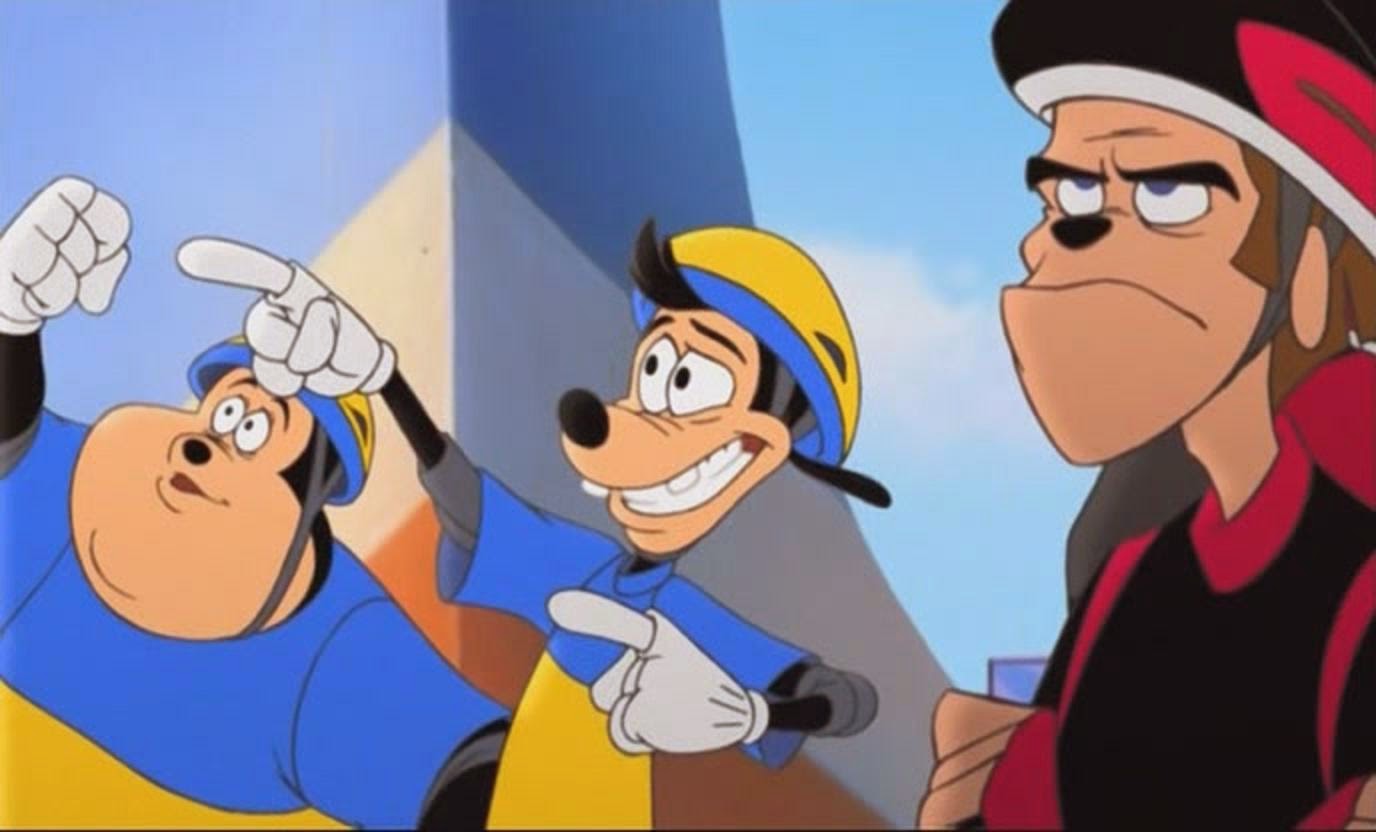 Though Goofy always means well, his amiable cluelessness and klutzy pratfalls regularly embarrass his awkward adolescent son, Max. When Max’s lighthearted prank on his high-school principal finally gets his longtime crush, Roxanne, to notice him, he asks her on a date. Max’s trouble at school convinces Goofy that he and the boy need to bond over a cross-country fishing trip like the one he took with his dad when he was Max’s age, which throws a kink in his son’s plans to impress Roxanne.
Initial release: April 7, 1995 (USA)
Director: Kevin Lima
Box office: 35.3 million USD

Free of the pressures that sometimes smother the big Disney releases, this movie has a refreshingly casual feel, with some sly humor, even daring to poke fun at Disney itself.
Full review
Nell Minow
Common Sense Media
Harmless enough day in the sun for Goofy; pity there’s an overwhelming feeling throughout that he deserves better.
Full review
Bob McCabe
Empire
« Chris Evans’ large, veiny…forearms
Brittany Snow »