At such a short length, the film perfectly captures loneliness and heartache. 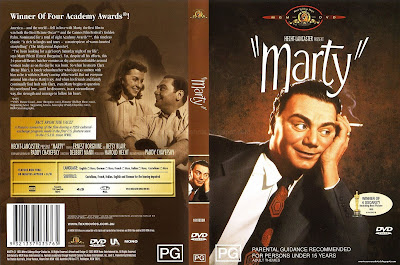 This acclaimed romantic drama follows the life of Marty Piletti (Ernest Borgnine), a stout bachelor butcher who lives with his mother (Esther Minciotti) in the Bronx. Always unlucky in love, Marty reluctantly goes out to a ballroom one night and meets a nice teacher named Clara (Betsy Blair). Though Marty and Clara hit it off, his relatives discourage him from pursuing the relationship, and he must decide between his family’s approval or a shot at finding romance.
Initial release: April 11, 1955 (New York City)
Director: Delbert Mann
Screenplay: Paddy Chayefsky
Story by: Paddy Chayefsky
Awards: Academy Award for Best Picture

Great movie. I love the reference it gets in Quiz Show as well. Underlines how treasured it was at the time. Top notch movie. Also a Palme d’or winner at Cannes.

One of the most relatable movies of all time. Just feels so realistic, in terms of time, place, characters, dialogue and interactions. I love how you follow Marty’s journey and really feel and root for him even if he’s not the most extraordinary person ever.

My favorite part is when his mother complains to her sister that she’s an old elderly lady in her 50’s.

Not to be confused with “Martin” by George A Romero another old short movie on a low budget that deals with loneliness and heartache. Also very good.

[Welcome to the basement did a good episode about Marty.]

I have a story about this movie. It was showing at a theater near me maybe 6.5 years ago. It was a rare thing to see a movie this great at a theater and Ernest Borgnine was going to be there to give an introduction. So yeah, I was pretty jazzed about it (yes I said jazzed). It’s one of my favorite movies. I own it on DVD, and have for many years. I’m that kind of person. The theater it was showing at was the NW Film Center. Well anyway, I invited my mom to go (because 21 year old me invites his mom places, shut up). So we get there an hour early. An hour early. The line is around the block. They haven’t even started letting people in yet. The theater holds like 500 people, and we wait and wait and they let people in. We are the 3rd in line when they say the theater is full. So I guess at least we aren’t the 1st people to be rejected, but we’re right behind them.

My mom and I ended up walking around for about 20 minutes and ended up at another theater and saw “Undefeated” a documentary about a HS football team. Which is actually amazing and is a somehow already forgotten Oscar winning documentary. That movie being great really should have made up for it, but I’m still depressed I didn’t get to see Ernest Borgnine before he died.