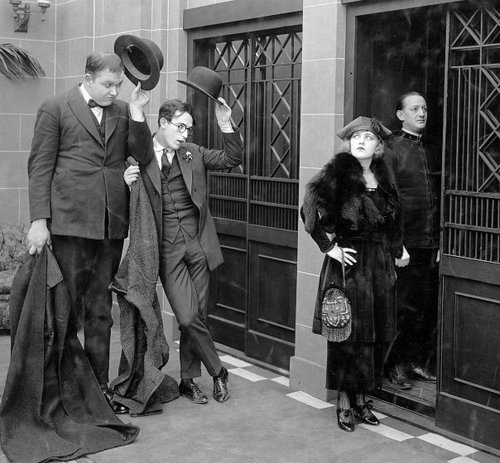 The man hanging from the clock is Harold Lloyd, the third great comedian of the silent movie era alongside Charlie Chaplin and Buster Keaton.  I first encountered this image when I was only 10 years old but it made a strong impression on me.  I really wanted to know how he got into that predicament …and how he got out!  Years later, I finally saw Safety Last! (1923) with its riotous climb up the wall of a downtown L.A. department store.  Recently, I took my family to see it, complete with an organ accompaniment and a huge, appreciative audience.  My son asked me why Harold Lloyd is not as well-known as Chaplin and Keaton.  I answered that he didn’t have that many good movies.  No sooner had I said it then I knew I had no basis for such a idiotic claim.  The truth was I hadn’t seen any other Harold Lloyd movies other than Safety Last!.   In fact, I would have been hard pressed to name even one other Harold Lloyd movie.  I consider myself a serious student of film.  I’ve seen all of Chaplin and Keaton’s feature length silent films and most of their shorts.  Why was I was so ignorant of Harold Lloyd’s movies?  Was it just me or something about them?  After a few months of research, I think I’ve figured it out.  But first, a little biography…

Harold Lloyd was born in Burchard, Nebraska on April 20, 1893.  His family lived in seven towns in fifteen years as his father  “Foxy” pursued one opportunity after another.  Foxy’s collision with a beer truck, a successful lawsuit, and the flip of a coin landed the family in San Diego, California in 1912 where Foxy opened a pool hall.  Harold attended High School and pursued his love of the theater acting in local stock companies.  But Foxy’s pool hall failed and the theatre season ended leaving Harold broke and hungry.  In 1913, he moved to Los Angeles where he found work as an extra at Universal Studios.  When his friend Hal Roach inherited some money, he asked Harold to come make some movies with him.  While most of these early efforts were pretty bad, they finally sold one called Just Nuts (1915) to the New York film distributor, Pathe.  For several years, Roach and Lloyd pumped out over seventy one-reel comedies with Lloyd playing  a Chaplinesque character called Lonesome Luke, whose pants were too tight and coat too big (the opposite of Chaplin’s little tramp.)  But Lloyd felt that Lonesome Luke was too imitative and derivative.  He created a new character who wore a pair of horn-rimmed glasses.  His “glasses character” was a likeable go-getter who could just as easily be a rich idler as a gunslinger or a shoe salesman.  With Pathe’s approval, the glasses character first appeared in Over the Fence (1917), a baseball one-reeler.  Soon Lloyd, leading lady Bebe Daniels, and comedian “Snub” Pollard were turning out a “glasses” short per week .  Between September 1917 and October 1919, eighty-one one-reel shorts were released starring the glasses character – and the audience loved him.

The first two-reeler Bumping in Broadway (1919) demonstrated that the audience was hungry for comedies in a longer format.  A dozen two (and a few three) reel shorts followed with growing popularity, growing budgets, and a higher quality.  For the one-reel films, a scene usually had only one take.  The two-reel shorts had three or four takes per shot, allowing the filmmakers to pick the best.  Consequently, the two reelers are significantly better movies.  With From Hand to Mouth (1920), the third two-reeler, Mildred Davis became the new leading lady (and would later become Mrs. Harold Lloyd.)  During a publicity photo shoot for Haunted Spooks (1920), Lloyd lost his right thumb and index finger when a prop bomb went off in his hand. The “two-reelers” got longer and longer until, beginning with A Sailor-Made Man (1921), they were feature length.  About halfway through the silent features, Lloyd left Hal Roach and started his own production company.

In the 1920’s, Harold Lloyd made eleven feature length silent movies.  All of them are very good, several are great (Grandma’s Boy(1922), Girl Shy(1924),The Kid Brother (1927), Speedy(1928)), and two are classics (Safety Last!(1923) and The Freshman (1925)).  Compare this output to Chaplin who made only three features in the 20’s.  Even more important than shear volume is how likeable and relatable Lloyd’s character becomes in the silent features.   The world he battles through is familiar to the audience and the hurdles he faces are realistic and commonplace.  The gags are always credible, whether he is eating mothballs like candy (Grandma’s Boy (1922)), wrestling a live turkey on a streetcar (Hot Water(1924)), having his tuxedo unravel at a gala dance (The Freshman(1925)), herding five drunks through traffic (For Heaven’s Sake(1926)), or climbing a building and hanging from the clock (Safety Last! (1923)).  Lloyd liked to think of his movies as either “story pictures” or “gag pictures.”  But the best of them have plenty of both.  What makes the climb in Safety Last! (1923) so fun and harrowing is that we feel we know the guy and really want him to succeed long before he starts up the building.  Grandma’s Boy (1922), The Freshman (1925), and The Kid Brother (1927) have complex, fully developed story arcs with detailed, fleshed out characters – and plenty of gags!   In The Kid Brother (1927), for example, Harold is a scrawny lad who desperately wants the approval of this father and brawny older brothers.  During the movie’s climax set in a derelict ship, Harold single-handedly faces an enormous thug who has stolen the town’s money.   The thug pins Harold to the wall and clubs him on the head.  Harold doesn’t blink.  The thug clobbers him again and again.  Finally, Harold runs for it and we see his head was below a steel bracket that was taking the blows!

Of course, Harold Lloyd is best known for his so-called dare-devil comedy such as the Safety Last! climb.  In fact, only five movies include height as a gag element: Look Out Below (1919), High and Dizzy (1920), Never Weaken (1921), Safety Last! (1923), and Feet First (1930).  Many of the movies include some kind of chase or race against time, my favorites being the ends of Now or Never (1921), Girl Shy (1924) and Speedy (1928).  But the dare-devil label doesn’t capture the vast majority of gags and gimmicks he used.  There’s the football game in The Freshman (1925), the telephone scene in Number, Please (1920), the toothache in Why Worry? (1923) and Civil War flashback in Grandma’s Boy (1922) to name just a few.  There are a few gags that appear over and over simply because the audience loved them (the mouse up the pant leg, for instance).  During the 20’s, Harold Lloyd was the king of silent comedy.  He was more prolific than Chaplin, more popular than Keaton, and more accessible than both.

Here is a piece of the wonderful race against time from Girl Shy (1924):

The advent of sound pictures was not kind to the silent comedians.  Lloyd made the transition immediately by reshooting Welcome Danger (1929) with sound and the audience loved hearing Harold’s voice for the first time.  Chaplin made two more silent movies in the 30’s and poor Keaton’s movie career ended altogether (until his rediscovery in the 1950’s).  Harold Lloyd’s seven sound motion pictures are a mixed bag.  Feet First (1930) has a climb up a building which is more elaborate but much less satisfying than the one in Safety Last! (1923).  The Cat’s Paw (1934) is a clever story about political corruption but Harold’s glasses character seems weirdly out of place.  The Milky Way (1936) is a pretty good screwball comedy about a milkman reluctantly turned prizefighter.  In all of the sound movies, Lloyd is at his best when using his trademark physical comedy but rather dull and amateurish when the dialogue takes over.  With his audience shrinking, he finally gave up and retired to his enormous mansion in Beverly Hills called Green Acres.   In his later years, he was elected Imperial Potentate of the Shriners, won a special Academy Award in 1952, and raised three children and a granddaughter. Harold Lloyd died March 8, 1971 at the age of 77.

Back to the question I asked at the beginning of this post:  If Harold Lloyd was so popular in his day, more prolific and as much a comic genius as Chaplin and Keaton, why is he so little known today?  Chaplin’s reputation never waned and his movies have always been available.  His Little Tramp character is truly iconic.  Keaton was re-discovered in the fifties.  He made cameo appearances in many movies in the 50’s and 60’s until his death in 1966.  His silent features like Steamboat Bill, Jr. (1928) and The General (1926) were easy to find at art theatres and retrospectives.  Harold Lloyd, on the other hand, kept his movies locked in a vault for the rest of his life.  He was worried about having them shown at the wrong speed, chopped up on television, or badly scored.  Lloyd was an obsessive perfectionist and rather than have his movie shown wrong, he chose to not have them seen at all.  As a result, three generations passed without access to the best of Harold Lloyd.  In the 60’s, two compilation movies were made showing mainly the chase scenes but these gave no hint of the genius of the full movies. In 1974, Time-Life Films released horrendous versions of the movies with bad editing, bad music, and run at the wrong speed thus proving Lloyd’s misgivings were well-founded after all.  In 2005, New Line Cinema, working with the Harold Lloyd trust, got it right with the release of a DVD box set of all eleven silent features, four sound features, ten of the multi-reel shorts, and a handful of one-reel shorts, all at the right speed and all with wonderful orchestral scores by Robert Israel.  This set includes scenes which have been missing since the 20’s including the moving van scene from Speedy (1928) and the scene where Harold cries in Jobyna’s lap in The Freshman (1925).  Finally, it is possible to evaluate the work of Harold Lloyd as it was originally intended.  And it’s great!

Inverted camera shot to get the hair to stand up, or was his hand touching a Van de Graaff generator? Hands and feet are out of shot.