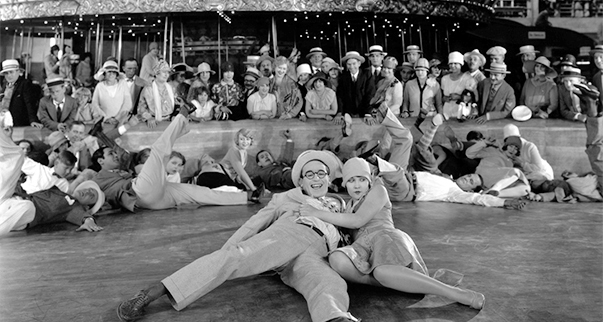 Directed by Ted Wilde and written by John Grey, Lex Neal, Howard Rogers, and Jay Howe, Speedy is the story of a man trying to save the last horse-drawn streetcar for his girlfriend’s grandfather in New York City while trying to get work in the city. The film is a slapstick/silent comedy that doesn’t just explore the frenzy of the modern world but a man trying to salvage of what is left of what near and dear in the old one as the titular character of Harold “Speedy“ Swift is played by Harold Lloyd. Also starring Ann Christy, Bert Woodruff, Brooks Benedict, and Babe Ruth as himself. Speedy is a sensational and witty film from Ted Wilde.

Ted Wilde’s direction is definitely thrilling in terms of capturing life in late 1920s New York City in all of its craziness in the boom that it’s in before the Great Depression as well as that air of escapism. Many of Wilde’s compositions are quite dazzling to capture the craziness of the locations in New York City that include some unique chase scenes for the second and third act where Speedy is driving a cab in the former and the streetcar in the latter. The usage of the wide and medium shots would play into that craziness as well as the beauty of the sequence in Coney Island not just for the rides but also the lights set at night.

There’s a beauty to Wilde’s direction in those moments while his approach to setting up the gags are just as engaging as well as in the comical moments that occur such as a hilarious sequence where Speedy picks up Babe Ruth and drive him to Yankee Stadium for a game. Wilde’s direction also maintains a sense of energy and wit that is always entertaining in the way Speedy does whatever to help his girlfriend’s grandfather. Overall, Wilde creates an exhilarating film about a man helping out another old man through a series of misadventures.

Cinematographer Walter Lundin, with special effects photography by H. Kohler, does excellent work with the film‘s black-and-white photography from the way the lights of Coney Island look at night with such beauty to the daytime exteriors of the city with Kohler providing photography for some of the chase scenes. Editor Carl Himm does brilliant work with the editing as it is largely straightforward to play with the film‘s energy and humor as it includes some rhythmic cuts. Art director L.K. Vedder does superb work with the look of the streetcar that is used as well as the design of some of the shops where many of old men work at. The film’s music by Carl Davis, for its 1992 reissue, is amazing for its mixture of jazz and ragtime music to play into the period of the 1920s as it has an air of fun in the music.

The film’s fantastic cast include a hilarious cameo appearance from baseball legend Babe Ruth as himself as well as Brooks Benedict as the sleazy businessman Steve Carter who tries to buy out Pops Dillon. Bert Woodruff is excellent as Pop Dillon as the driver of a horse-drawn streetcar that is desperate to hold on to his business while he wonders why Speedy keeps losing his job. Ann Christy is wonderful as Speedy’s girlfriend Jane who is worried about her grandfather while pondering about the idea of a future with Speedy. Finally, there’s Harold Lloyd in an incredible performance as the titular character as this determined yet bumbling man who is trying to do what it takes to help Pops while he screw things up along with way as some of it is due to his love for the New York Yankees as it’s an iconic performance from Lloyd.