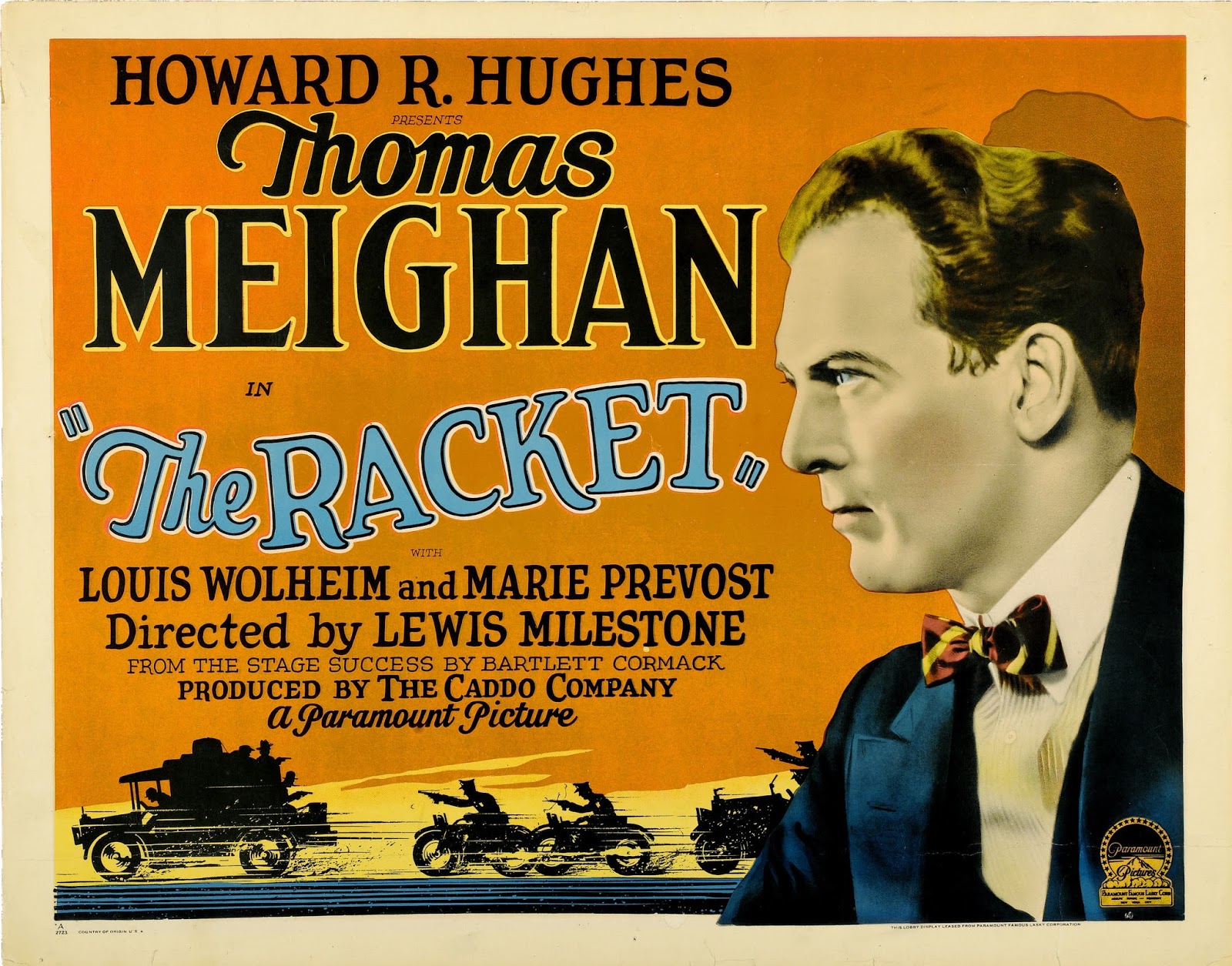 In this Prohibition-era silent film, James McQuigg (Thomas Meighan) is an honest police captain in a city ruled by gangsters and corrupt politicians. McQuigg tries repeatedly to arrest Nick Scarsi (Louis Wolheim), a bootlegging kingpin, but can’t get charges to stick. After rejecting Scarsi’s bribes, the incorruptible McQuigg is transferred out of town, but refuses to be intimidated. When Scarsi’s younger brother is caught in a hit-and-run, McQuigg attempts to take down the criminal underworld.

THE RACKET (1928). An honest police captain is determined to bring his city’s crime boss to justice. This is a scene between gold digger Helen and cub reporter Ames–she actually has the integrity not to lead on the young man because she likes him. Original music composed by Robert Israel. 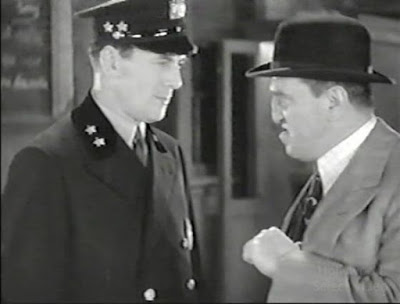 The Racket (1928) is surprisingly cynical, even while still coyly presenting what we recognize as frothy 1920s images – including speakeasies, callow youth, and an almost manic desire to rebel. Even those inclined to think that silent movies, by virtue of their being silent, are a bit of a joke will still see much in this movie that is starkly modern and which speaks to us today. 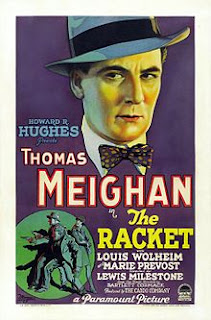 Producer Howard Hughes was only twenty-three years old when he took this on for one of his very first projects in the film industry. It is a story of Chicago gangsters and the honest cop who tries to bring them down. The honest cop, played by Thomas Meighan, one of the most popular leading men of his day, is not so incorruptible that he doesn’t resort to beating up suspects to get the truth. This is, after all, Chicago, and it is, after all, the 1920s. The film makes no explanation and certainly no apology for his beating up suspects in custody, rather it paints him as a savvy hero of the dirty streets he patrols. With the musical score that is now part of the restored film, we see a bit of cheerleading on the side for Meighan with a dash of“The Minstrel Boy” and other Irish tunes when he appears on screen. The gangster, played by Louis Wolheim, says he is, “just a dumb harp.” More on that later. 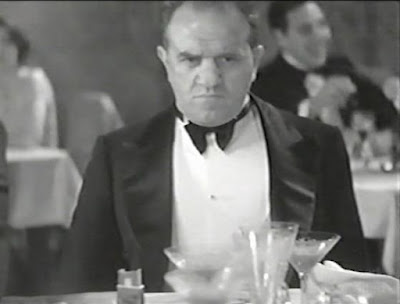 Louis Wolheim plays Nick Scarsi, a gang leader whose only trouble is women, whom he does not trust, and his younger brother, whom he cannot control. Wolheim commands every scene he’s in, not only because of his imposing size and that craggy boxer’s nose in the middle of his scowling face, but because he was one of the early silent screen actors who somehow figured out that he didn’t need to over emote or to pantomime to excess his feelings to overcome the lack of sound. All he had to do was stand still and raise an eyebrow and all attention was on him. We last saw him here in another great role in Danger Lights (1930) with Jean Arthur. 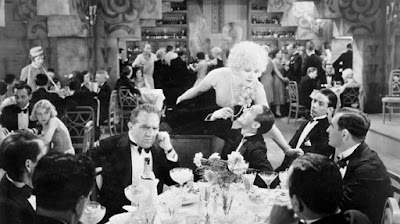 His kid brother is played by George E. Stone, a typical 1920s youth chaffing at being sent to college and takes every opportunity to rebel against it. His Brilliantine hair, his pencil thin mustache, and his hip flask tell us he is the cat’s pajamas, but he wants nothing more than to ditch college and hang out with his big brother Louis – and the women in the corrupt wards his brother controls who flock to powerful men. Younger brother George E. Stone is not particularly interested in being a gangster; he just likes the idea of sitting around in a nightclub while chorus girls fawn over him because of his brother.
One such is Marie Provost, who plays a chorus girl with the incongruously famous name Helen Hayes. Considering Miss Hayes was well known on Broadway at that time, one wonders why they didn’t bother to change the name, but it brings a chuckle every time I see it on the title card.
Marie Provost is no fool, however, and she’s no shrinking violet. When Wolheim brings his gang and his brother to a private party at a speakeasy, they are in evening dress, the prohibited liquor flowing, and the girls are free and easy. When Miss Provost is rebuffed by Louis Wolheim, who regards all women as poison, she immediately attaches herself to his younger brother. She does it not simply because she knows the younger brother is an easier mark, which he is, but she does it purposely to needle Wolheim. Considering he’s the kingpin of the neighborhood, it’s quite a daring act. 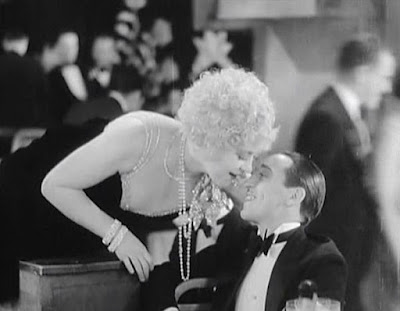 A rival gang arrives and Wolheim is always looking for a showdown but Thomas Meighan and his men quickly take control, though the rival gang leader has been killed. Wolheim and his men are taken into custody over the killing, but they are soon released because Wolheim has a connection with “the old man,” who is a corrupt judge. He arranges for Meighan to be sent to a suburban precinct where the cop will no longer be in his hair. It is a moment of disgrace for Meighan.
Wolheim’s younger brother is cutting capers behind his back and drives around in a jalopy with Marie Provost. He gets a little rough with Marie and she tells him off. He gets in a hit-and-run accident and the pedestrian he hits will later die. Both he and Marie are brought into the nearby police station for questioning. It is Meighan’s new precinct. At first, Meighan is unaware he has his enemy’s younger brother in the lockup. 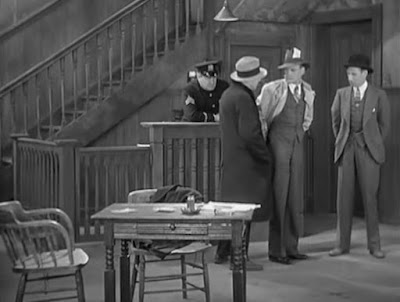 Three reporters hanging around looking for a story now inject a little levity in the proceedings. Two are hard-boiled veterans, and one is a cub reporter just out of college. He is handsome young John Darrow, and we know he is new at this game because he is very polite, a little nervous, wears his press pass very prominently tucked into his hat band – about the size of a billboard – and instead of a trench coat he wears his college boy slicker with doodles drawn on the back of it in indelible ink. This was one of the great fads of the 1920s, writing doodles and “witty” sayings on raincoats and on jalopies. Darrow made a number of films in the 1920s through the middle part of the 1930s, and then later became a talent agent. 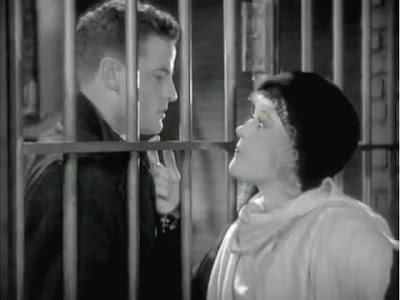 The veteran newshounds tease him a little, but Marie Provost gently vamps the innocent young man to the point where he is so charmed, that when she is locked up in the cell with streetwalkers, he brings her a care package – toiletries and a virginal nightgown. She smirks demurely and this hard gal must have a heart of gold because she does not tease him mercilessly. At the end of the movie, for his own good, she will send him on his way. 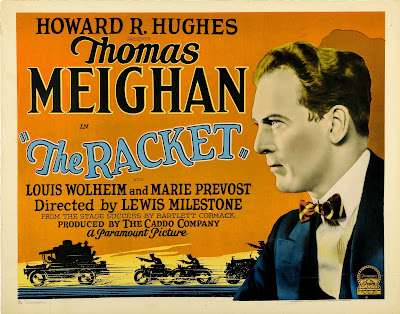 The movie is filled with very witty lines, macabre humor and brutal enough to be unflattering enough to all concerned – the police, despite our heroic Meighan; the corrupt district attorney; and the judges – to have this film banned for a time in Chicago, which apparently was not fond of being depicted as a den of political corruption. (The infamous St. Valentine’s Day Massacre would occur only three months after this movie was released.) 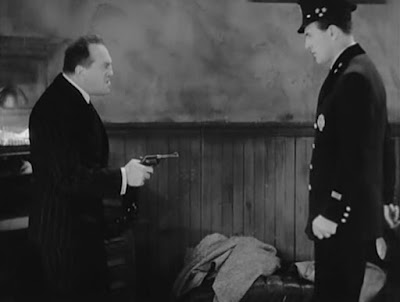 Louis Wolheim shoots a police sergeant in his attempt to escape from the station house where he has gone to free his younger brother. The innocent cub reporter helps identify him, solve the crime, and justice prevails. Thomas Meighan, who knows when to kick out the reporters and knows when to use them for publicity, sends them off to write up a story that will put fear in the hearts of other gangs. At the end of the film, he announces he is tired and would like to go to bed but he has to finish the report and mop up this incident. When he’s finished, by morning, he expects it will be time to go to Mass. He smiles, with a glint in his eye, and we are given in this character another stereotyped personification of the Irish cop – quick with his fists but charming as all get-out.
This last scene was, for its day, more daring than it looks.
In an era when immigrants were not as welcome as they had been around the turn-of-the-century – legislation in the 1920s pushed by the Republican-controlled Congress sought to limit immigration severely – the Irish had been in this country long enough to have gained a foothold and climbed in society to positions beyond the police station house, and newer waves of immigration from other countries took the brunt of prejudice.  However, there was still a strong anti-Catholic bias in the country, which with a shift towards conservatism in the 1920s, would defeat Al Smith, the Governor of New York, in his run for the presidency in 1928. Historian William Leuchtenburg in his The Perils of Prosperity 1914-32, quotes the “liberal” Protestant publication Christian Century which remarked regarding Al Smith’s run for presidency that Protestants could not “look with unconcern upon the seating of a representative of an alien culture, of a medieval Latin mentality, of an undemocratic hierarchy and of a foreign potentate in the great office of the president of the United States.”
Mr. Leuchtenburg notes, “Smith was seen as the spokesman for the foreigner, a man, if elected, would flood the nation with a new type of European immigrants…” George Ford Milton, editor and historian from Tennessee, wrote that Smith’s appeal was “to the aliens, who feel that the older America, the America of the Anglo-Saxon stock, is a hateful thing which must be overturned and humiliated; to the northern negroes, who lust for social equality and racial dominance; to the Catholics who would been made to believe that they are entitled to the White House, and to the Jews who likewise are to be instilled with the feeling that this is the time for God’s chosen people to chastise America yesteryear.”
In 1924, four years before this film was released, the Ku Klux Klan had reached the height of its popularity because it was “anti-Catholic, anti-Semitic, anti-Negro, and antiforeigner.” In Birmingham, Alabama, “a Klansman murdered a Catholic priest and was acquitted;” in Illinois “two hours after a monster Klan ceremony a Roman Catholic Church was burned.” This from a chapter the author titles “Political Fundamentalism.” We see its mutations today. When the Klan lost its power, it was largely due to sexual and bribery scandals among its leadership that were unpalatable to Middle America at the time. Murder, brutality, and oppression as expressions of bigotry were apparently okay.
The Racket is fast-paced and frank; it carries very few gimmicks, and the writing is top-notch. It is daring, and was nominated for one of the very first Academy Awards. It began the gangster genre of motion pictures, and for many years was thought to have been lost. It was released in November 1928. The Era of Wonderful Nonsense had one more year to go.
Come back next Thursday, February 15th when we will discuss two more films from the tail end of the decade:Our Dancing Daughters (1928) and Our Modern Maidens (1929). Both films star Joan Crawford, whom novelist F. Scott Fitzgerald labeled the quintessential flapper. Women had won the right to vote at the beginning of the decade (and it was recorded that many were overwhelmingly supportive of Democrat Al Smith for president); by the end of the decade, so these two movies will have you believe, they were running the show.
Previous Post: « Alexandra Daddario: Marie Claire Malaysia [April] 2018
Next Post: Chrissy Teigen: “Asking Michelle Wolf to apologize, are you f***ing kidding me?’ »