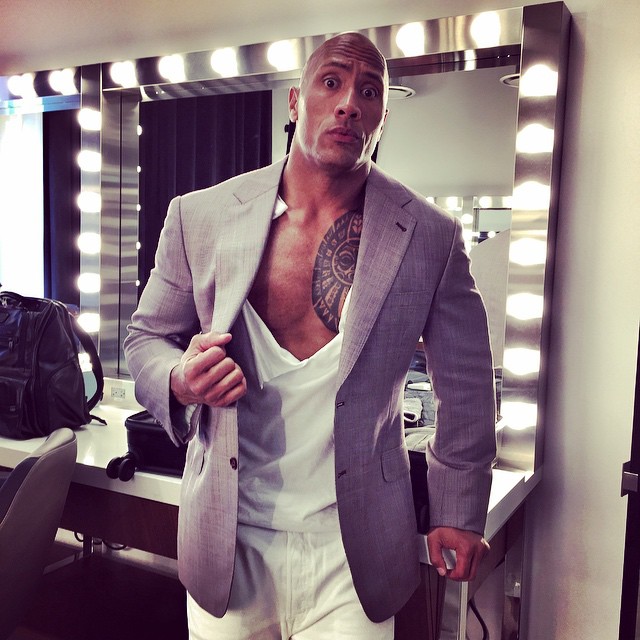 Just when we thought Dwayne Johnson and his Fast and Furious costars had settled their beef, the actor just revealed that he hasn’t spoken to Tyrese since their feud. Just in case you need a refresher, Dwayne shocked fans back in November 2016 when he called his male costars “candy asses” in a scathing post on social media. Even though we never found out who Dwayne was talking about or why the feud began, something tells us the upcoming Hobbs and Shaw spinoff movie may have had something to do with it. Here’s everything we know about the situation.

Secret weapon. Many productive meetings and big business deals have been sealed with a handshake at my GSD (Get Shit Done) table that’s inside my trailer. This table holds a lot of great mana (spirit/power) and energy. And if these wood slabs could talk… well it’s best they can’t talk for national security purposes. Great shot by @sevenbucksprod President @hhgarcia41 capturing our post meeting aftermath. #SecretWeapon #GSDTable #LetsGetShitDone ✔

Following rumors that a Hobbs and Shaw spinoff was in the works, Dwayne shared an Instagram photo of himself signing a mysterious business deal on his “Get Sh*t Done” table.

It seems Tyrese’s efforts went unnoticed, because a few days later, he was back at it again. Tyrese even posted a photo of the two at a past Fast and Furious premiere on Instagram, writing, “I don’t do email bruh. You got my cell same San Diego # hit me.”

#PSA Congratulations to @TheRock and your brother in law aka 7 bucks producing partner @hhgarcia41 for making the fast and the furious franchise about YOU – And like you, DJ even if they call I will not be deleting this post – Gn folks see you in 2020 April #FastFamily right? Nah….. it’s about #TeamDewayne #3yrs will it be worth the wait? #NoShaw just Hobbs will this be another #BayWatch? Guys guys just relax I’m just a passionate film critic

After Universal Pictures announced that it is pushing the release date for Fast and Furious 9 to 2020 (it was originally scheduled for release in 2019), Tyrese put the blame on Dwayne, calling him out in yet another scathing Instagram post.

With Fast and Furious 9 moved back to 2020, Universal officially confirmed that a Fast and Furious spinoff is in the works. The film, which will star Dwayne and Jason, is set to hit theaters on July 26, 2019, and one person who probably won’t be watching it is Tyrese.

Following Universal’s announcement, Tyrese posted a photo of the “Fast Family” on Instagram, along with a message for Dwayne. “Diversity, love, multi ethnic worldwide multi generational, United Nations, One Race, Fast Family…… Until Dewayne showed up I guess this whole time he had a problem cause he wasn’t the ONLY ONE on the movie poster………..,” Tyrese wrote. “I guess dreams do come true congratulations to @hhgarcia41 and @therock you guys are just amazing you really broke up the #FastFamily I tried to warn you guys… You thought I was hating…… I was simply fighting to keep the family together what makes us great is when you see us all TOGETHER we don’t fly solo….. #MyLastPost today….. I got 3 years of venting on this clown – They offered but YOU didn’t have to agree with a solo #HobbsMovie #OriginalFastFamily we salute you and stand on your shoulders #VinDiesel #PaulWalker #RobCohen #RomanTej were offered a spin off we TURNED IT DOWN!!!”

Vin Diesel also shared a photo of his own on Instagram featuring Paul Walker and Tyrese and captioned it, “Brotherhood . . .”

Tyrese then reposted Vin’s snap on his page and changed the caption to read: “Never confuse determination with desperation….. What’s understood don’t have to be explained…… 44 million just got the memo…. Although it appears to be…. I’ve never been in this alone…….. #PerceptionVsReality #FastFamily like I said we don’t fly solo. President Obama’s integrity teachings is of a man who makes everyone feel like they MATTER…..”

I ain’t got no worries, I sleep good at night cause I live and walk in my truth….. I didn’t get this far in my life and career from lacking determination and not being able to take a lick or 2……. South Central LA raised me and Hollywood and music pays me……. All is well cause the lord Jesus Christ is a mountain mover….. moving on

After Tyrese took one last jab at Dwayne when he posted a photo of himself sleeping in bed, Dwayne finally broke his silence on Twitter.

My goal from day 1 was to come in and create an exciting/fun character for the fans, elevate the franchise and build it out. #HobbsShaw2019 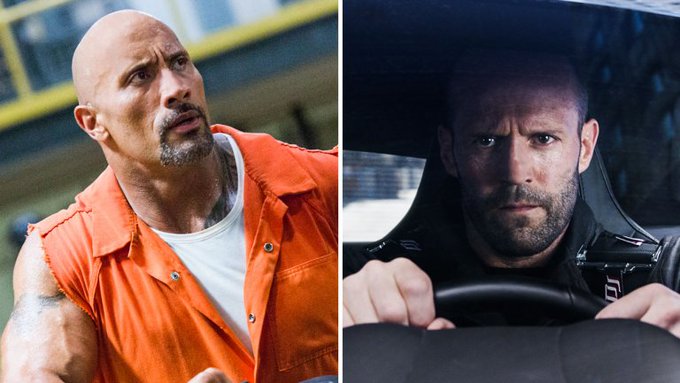 Over the weekend, Vin weighed in on the Fast and Furious feud when he posted a photo of him and Dwayne together on Instagram and said it’s “unfair” to blame anyone for the film’s release date delay. “Brotherhood… and all it’s complexities,” Vin wrote. “I know there has been a lot of speculation as to why the Fast 9 release date was pushed… but it would be unfair to say it is anyone’s fault. As we plot the course to expand the Fast & Furious universe, one must be mindful to take stock of the roads we took to get here. The pillars of authenticity, family and most importantly, our loyal fan’s perspective has been instrumental in procuring success. However, like any vehicle that has run around the globe 8 times, the franchise is in need of maintenance. My good friend and the godfather of Universal, Ron Meyer has granted me the time to do just that. We have some very exciting news to share soon… stay tuned. Yours truly, Dom #FamilyAlways.”

Daddy’s gotta go back to work ~ Hobbs. Pumped to expand and build out the FAST & FURIOUS universe in a cool, exciting way with our @sevenbucksprod, writer/producer Chris Morgan, producer Hiram Garcia and lead producer and my bigger twin, Neal Moritz. Thank you UNIVERSAL STUDIOS for being tremendous partners who see the big picture and for coming to us years ago with this spinoff idea. Huge shout to my brother, Jason Statham for the trust and wanting to create and deliver something fresh and bad ass for the fans. I have a tremendous amount of respect for this franchise that I’ve enjoyed droppin’ blood and sweat in over the years and my vision is to create greater opportunities for not only my fellow FF cast mates, but for other amazing actors as well who want to be a part of something new and cool. I want to use my spinoff platform to create new characters that fans will ultimately love to have fun with in multiple chapters and platforms. Film, TV, Digital, Virtual Reality etc.. the more opportunities we can create the better for the fans. Smart business. Let’s have some FUN and to quote, Hobbs the boss, if you don’t like it, we’re happy to beat that ass like a Cherokee drum. #HOBBS #SevenBucksProds #NewOpportunities #CandyAssesNeedNotApply JULY 2019

Dwayne later expressed his excitement over the Fast and Furious spinoff on Instagram, saying he’s “pumped to expand and build out” the franchise in “a cool, exciting way.” He also seemed to throw some shade at Tyrese at the end of his post when he quoted Hobbs, writing, “Let’s have some FUN and to quote, Hobbs the boss, if you don’t like it, we’re happy to beat that ass like a Cherokee drum.”

Still, Tyrese wasn’t done bashing Dwayne. In October 2017, he resurfaced a now-deleted video from 2015, in which Dwayne playfully hates on his album while on set. “Haters come in many forms……” Tyrese captioned it. “In my Kanye voice #BlackRose is one of the greatest R&B Soul Albums of all time.”

July 12, 2018: Dwayne Reveals the Status of His Relationship With Tyrese

Almost a year later, Dwayne appeared on Watch What Happens Live to promote Skyscraper and was asked if he’s spoken to Tyrese since their feud. “That whole thing with Tyrese, it was pretty disappointing because I’d been friends with Tyrese for a very long time,” the actor explained. “He voiced his opinion a lot on social media . . . we haven’t talked and I don’t see where we would.” Welp, I guess we can stop holding out hope that these two will ever be friends again.