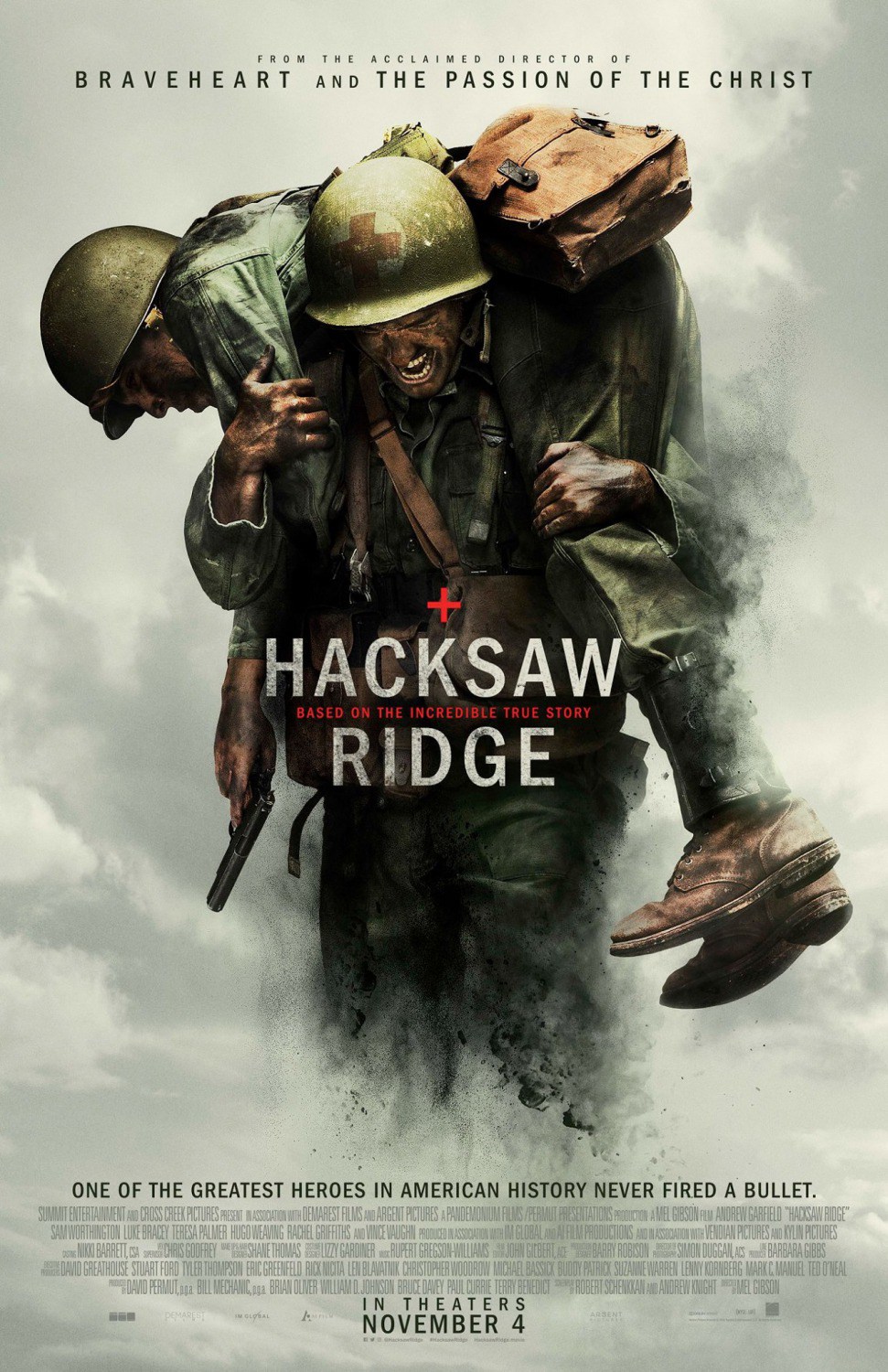 Mel Gibson is back in high form with this film. Every part of this film makes me love it. The family aspect with the drunk veteran for a father, the loving aspect with his wife, the boot camp, and of course the titular area of Hacksaw Ridge. Each aspect is different, and each builds Doss as a character until the final event when he showcases his bravery in true fashion. The acting is incredible all around, and Gibson even makes me like Sam Worthington and Vince Vaughn in this film. Hugo Weaving, as always, knocked it out of the park. The war scenes, while mostly covered in the advertisements, don’t show up in the movie until at least an hour into it. When they do show up, the scenes rival the D-Day landing in Saving Private Ryan. I can see this movie getting recognition and hopefully awards for those scenes. The footage of the actual people being interviewed was a nice touch too. It really showed the reality of the situations these people lived through.

Just got out of seeing this movie. I went in with decent expectations; I haven’t seen anything else by Tom Ford, but I am a fan of Amy Adams and Jake Gyllenhaal, so I figured I would give it a shot. I have to say the film totally blew me away in a way that I was not expecting. The standout was the structure of the whole movie, and the way everything kept unfolding. The interplay between the dual narratives was also incredibly well done. Acting was definitely a highlight as well. Adams was in the movie for a lot less time than I expected, but pretty much every cast member gave an A+ performance. There was humor that was pitch black, and there were really quite a few laughs throughout in the theater. Admittedly, I do also think there were certain things that missed a bit; i.e. the camerawork during a lot of the conversations were just closeups of the faces, jumping back and forth for basically one word answers, but that’s a minor thing really. I would say the movie is the second best I have seen this year, which is really saying something because this has been a fantastic year, but there are also a lot of really promising ones on the way, and I hope 2016 continues to impress.

It’s so interesting to watch the furthering of Lonergan’s style from the small-scale character drama You Can Count On Me to this, Margaret, an efficacious masterpiece about the lives intersecting in post-9/11 New York City and the immediacy of adult life. Lonergan’s formalism has advanced so much since he shot You Can Count On Me, his effortlessly perfect use of framing in order to best allow the actors to emote remains, but there are also numerous shots of the city emphasizing the numerous narratives that are going on around Lisa. He’s also not afraid, at all, to allow scenes to play out in long, extended shots- his use of framing makes spaces feel real and populated, especially Lisa’s cramped New York apartment. This is also a film about two different worlds, the world populated by ambitious and hopeful teenagers and the world populated by collapsed and hopeless adults colliding; at the opening of the film Lisa is an egocentric young woman driven by her narcissism, pushing her friends and teachers to the brink, not caring about anything other than herself but after the bus accident she realizes that there are so many different lives going on in this city and begins to fail under the weight of so much pressure. Without a doubt one of the finest films I’ve seen so far this year and one of the great American films of the decade. Kenneth is one of our finest auteurs.