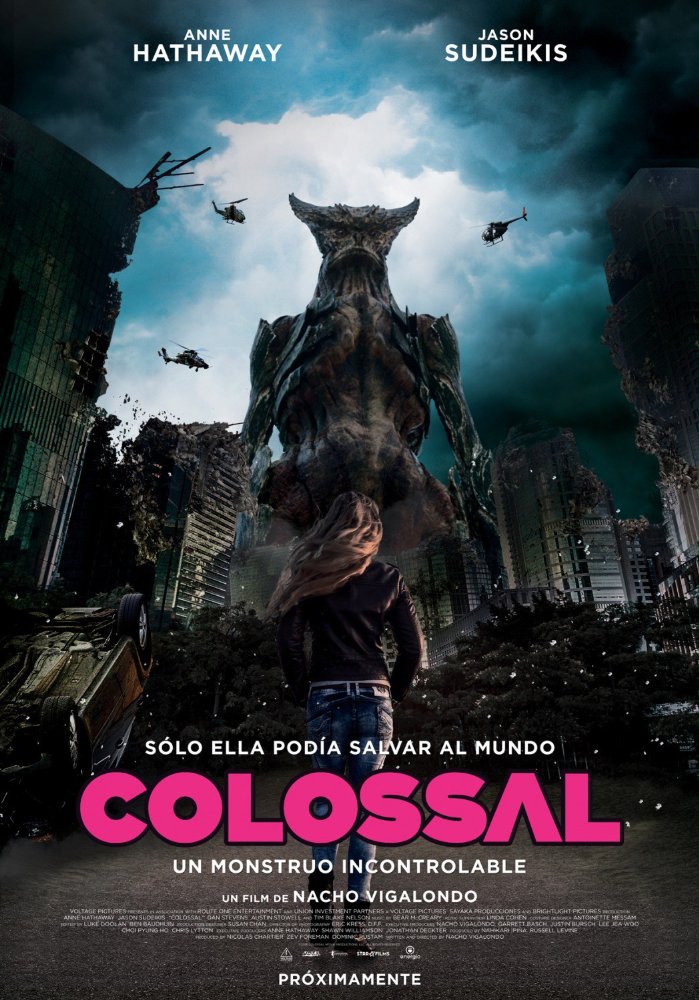 Gloria (Anne Hathaway) drinks too hard and parties too much. Her boyfriend has enough of it and throws her out. Gloria returns to her hometown, dreaming of making a new start, but instead revives her childhood friendship with Oscar (Jason Sudeikis), who runs a bar. After drinking a night away with Oscar and his friends, he wakes up to discover a gigantic monster rampaging through Seoul and realizes that somehow the monster is connected to her.
Release date: April 7, 2017 (USA) 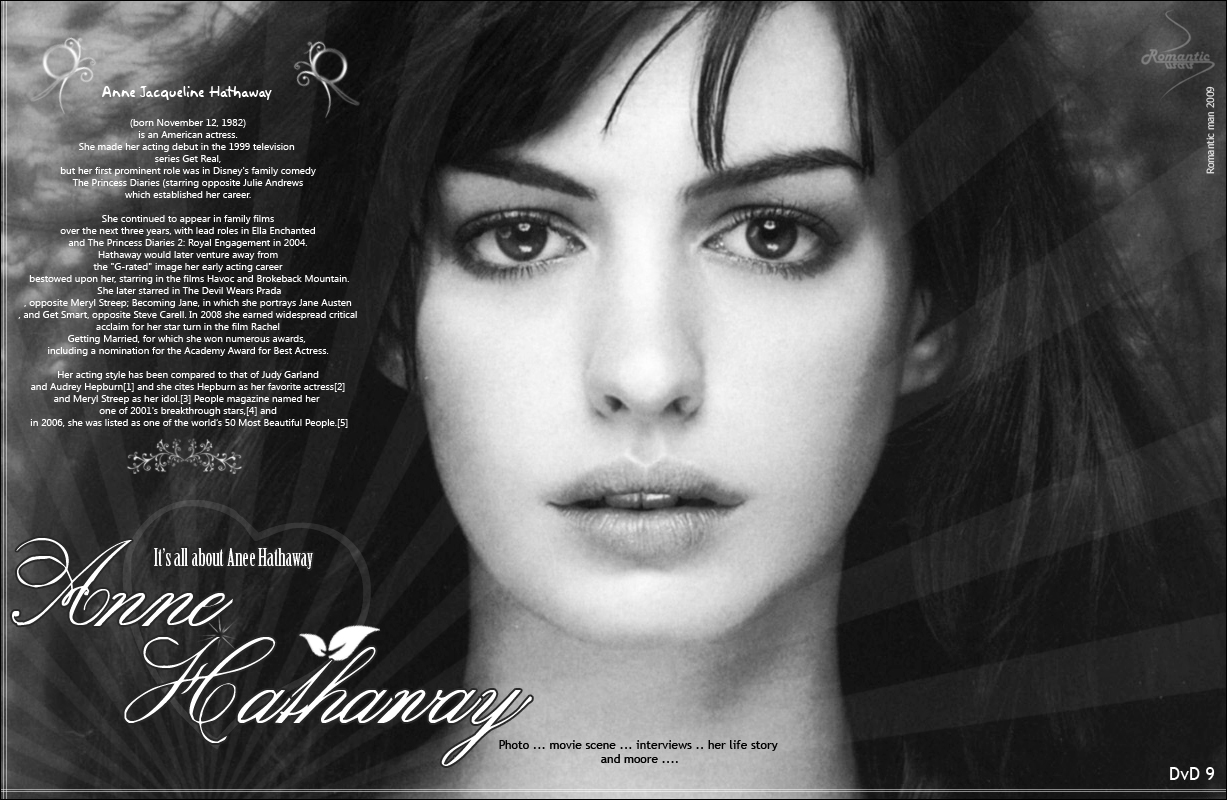 If Hathaway’s new movie, “Colossal,” doesn’t quiet the haters, nothing will. This clever mash-up of indie rom-coms and Japanese “kaiju” movies (think Godzilla and Mothra) presents an ideal showcase for the actress’s gifts – for spiky self-awareness, slapstick physical humor and subtle changes in tone and color that sneak up on viewers throughout a movie that’s never quite as simple as it seems.

Weaving together unlikely subject matter, the Anne Hathaway and Jason Sudeikis-led Colossal is perhaps the most audacious effort yet from writer/director Nacho Vigalondo – which says something off the back of his time travel, alien, and online voyeurism pics.

Principally, it’s a film about Gloria (Hathaway), a woman returning to her small American hometown and confronting her unhealthy relationships with men and booze. And then, half a world away, there’s also an enormous monster terrorising Seoul – somehow linked to Gloria and her actions.

“Colossal” opens with a scene inspired by those Godzilla/Mothra roots, when a little girl in Seoul clutches her dolly to her chest while an enormous monster terrorizes her home town. Cut to 25 years later, when Gloria (Hathaway) stumbles into her boyfriend’s apartment after a raging all-nighter. Clearly it’s happened before, and clearly Tim (Dan Stevens) has had it; he orders her to pack her things, just moments before her fellow revelers pile into the front door to keep the party going.

Homeless and virtually jobless (nominally Gloria is a blogger, but it’s not clear how much work she gets done in between binges and hangovers), she decamps to the New Jersey town she grew up in, setting up a makeshift campsite inside her family’s old, now-deserted house. Soon enough, she crosses paths with an old school friend named Oscar (Jason Sudeikis), who has taken over his father’s bar and who becomes an instant soul mate. Soon, the two are tossing back beers after hours, and Oscar is taking a protective interest in Gloria’s welfare, offering her castoff furniture and a job as a waitress.

Vigalondo displays a keen sense for depicting alcoholism, one that doesn’t oversell the pathos, and the same can be said for his cast. Hathaway’s range is on show here as she treads a fine line between funny and miserable, hopeless yet capable of change, while Sudeikis, playing a recently reunited childhood friend, serves up a superbly evolving performance as he peels away the more complex layers to the initially easy-going Oscar.

And, in an often-amusing supporting role as Gloria’s recent ex, Dan Stevens continues to put distance between himself and his former life as Downton Abbey’s Matthew Crawley.

So, what of the enormous monster? Despite not attacking Japan, it’s firmly akin to their kaiju monster genre in scale, impact, and human response. Colossal’s not the new Godzilla or Pacific Rim, however, with low emphasis on effects-based action. It may be optimistic to think those that come for the monster action are caught up in the emotion and humour elsewhere.

The Seoul-based sequences are inseparable from Gloria’s narrative, and one of the film’s many pleasures lies in how they interweave right to the end.

Audiences would be missing out on something really special here if they overlook the emotional punch Colossal packs out of any concern about sitting through a “silly” action movie. It’s much bigger than that.

“Colossal” wrings a great deal of fun — and also some genuine terror, by no means all of it monster-related — from its blithely bizarre conceit.Full review
A. O. Scott
The NYTimes
Feeling for all the world like a Charlie Kaufman creation, this sci-fi movie is all over the map; it’s constantly surprising, and yet it stays true to an emotional, human struggle.Full review
Jeffrey M. Anderson
Common Sense Media
In this observant, entertaining, wildly imaginative movie, just about everything has more than one meaning.
Full review
Ann Hornaday
Washington Post
Viewers who venture into this entertaining Godzilla-like send-up will also be singed by the pic’s fiery breath.
Full review
Bob Hoose
Plugged In
A woman finding her inner strength is inspiring. But a woman finding her inner giant monster who kicks butt — that’s just so cool.
Full review
David Edelstein
Vulture
The film is at once funny and haunting, a bizarre thrill-ride disguised as an indie drama, and among the most beguiling movies of the year.
Full review
David Sims
The Atlantic

“Colossal” takes diminishing advantage of an amusing premise, one that seems made for satirical treatment yet is executed with an increasingly awkward semi-seriousness.
Full review
Dennis Harvey
Variety
“Colossal” wrings a great deal of fun — and also some genuine terror, by no means all of it monster-related — from its blithely bizarre conceit.
Full review

‘Colossal’ review: Anne Hathaway is a beast, literally, in bizarre …

Imagine your problems, blown up to massive scale.

If it weren’t for a teasing scene at the beginning and the existence of reviews like this one, you might mistake “Colossal” for a certain kind of …

What if Godzilla was a projection of your issues? That’s the question posed by “Colossal,” a new film by Nacho Vigalondo in which an alcoholic …

This spoiler was fairly absent from marketing up until now, but it’s making a giant debut in the newest Colossal trailer.

Colossal is a sharp, weird monster movie that seems destined to …

Colossal is a sharp, weird monster movie that seems destined to … Read the latest reviews, interviews, and news from the annual film fest at …

‘Colossal’ Review: Missing This Oddball Monster Movie Would Be a …

At a time when genre and sci-fi movies focus so much on one thing—namely, stuff going boom—Colossal‘s true sucker punch is that it’s a …

Colossal review: Everyone has a monster, most aren’t this fun | Ars …

[This is a re-post of my review from the 2016 Toronto International Film Festival. Colossalopens in limited release on Friday.] Writing about a …

Colossal movie reviews & Metacritic score: Gloria (Anne Hathaway) is an ordinary woman who, after losing her job and being kicked out of her apartment by her.